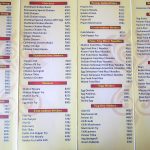 When a buzz about a 50-dish thali (priced at just LKR 5499) made rounds, we couldn’t wait to get our hands on it! So we made our way to Ponnusamy one sunny afternoon and here’s how our experience unfolded. Since there were 50 dishes to review we thought it best to keep the review short and concise. Overall, we’d give the food a 7 out of 10, ambience a 4.5 out of 10 and service a 6!

Unlike any usual lassi, this wasn’t as creamy and thick. However, the sweet and milk flavours were definitely there and was nice to sip on, on a warm day!

Contrary to the sweet lassi, this was thick and creamy with a heavy texture. We’re not complaining though – it was absolutely heavenly! The mango flavour also shone through the flavour of the curd.

We couldn’t get enough of this! It was the perfect balance of sweetness, sour and salt! Chilled to perfection we say this is the best to have along with a heavy dish, like the thali we were about to review!

Their chicken soup was actually very tasty although a little salty. It was creamy and thick with plenty of meat! The vegetable soup was another dish with really liked! With beans and carrot and a slight fried flavour to the soup, it was one of those good surprises.

Crispy on the outside, the ulundu wadei was fried to perfection. Biting into the flavourful inside was an absolute dream. This was a clear winner!

Set in the middle of the huge thali the assortment of the bread consisted of chewy parata, beautifully textured chapati and fluffy poori. They each had a taste to its own and were exciting to mix and match with the rest of the components in the thali

The Thali consisted of two types of biriyani; Chicken and Mutton. Needless to say, they were both absolutely full of flavour. The rice wasn’t overly moist, neither was it dry. It had the perfect texture! Plums and cashew added a sweet and crunch to it along with the caramelised onion. The meat was tender and well cooked. So we can undoubtedly say the biriyani was an absolute winner.

The Thali had both Egg and Vegetable Fried Rice dishes. We thought they were pretty mediocre and lacked flavour you’d usually find in a Chinese restaurant. Then again, you cannot go to a predominantly Indian restaurant and expect top-notch Chinese right?

Edible but not the nicest dish to savour, the veg Manchurian was a little disappointing. We wanted more flavour, more fragrance and more seasoning.

Other Types of Rice

The thali consisted of many types of rice such as samba, lemon, curd and plain white rice. The lemon rice yellow in colour didn’t have an overpowering lemon flavour as one would expect and we thought that was quite nice. The curd rice, however, was too watery for our liking. Although the balance of flavour was perfect we wished it was a bit thicker.

Although pleasing to the eye, we weren’t too pleased with its flavour. It was bland and dry and on the uninteresting side of things, unfortunately.

A luscious gravy with plenty of paneer, this accompaniment went well with the rice as well as the bread. It ticked all the boxes from flavour to aroma!

The prawn Masala was a punch of flavour! Its intense spice and thick gravy worked well together balancing out the flavours beautifully.

Another win for us. The 65s’ texture was spot on. Crispy, salty and crunchy, it was a dream! Similar in flavours used it is only the protein that sets in apart. The prawn is saltier than the rest and is amazing to chew on. So we’d pick that out of the lot for sure.

Almost with a pulled chicken texture, the Ponnusamy special chicken’s flavours were very deep. It had a very slight earthy bitterness to it as if was roasted chicken.

A gravy heavy dish, the meat we believe had to be cooked in the broth because the meat itself was very flavourful and tender. However, the gravy didn’t keep up with the meat in terms of complementary texture.

Although a bit on the dry side, the peppery flavour of the dish really came through. Again it was the protein that set the dishes apart however the flavour was the same.

The change in texture was welcomed by us but the flavours were almost the same as some of the other dishes. We thought there was nothing too special about it!

Scrambled with chilli, garam masala, urad dal, mustard, pepper and more it was a super flavourful. It would’ve been more appetizing if served warm right off the cooker.

I mean, it was nice? Props to their presentation!

A chickpea accompaniment the channa malasa was sweet and spicy in all the right ways. The slight saucy gravy it came in made it a not so messy option to have with your bases. It was wholesome and a dish we’d definitely go back for!

With a perfect crumbed outside and crunchy skin with a moist inside, a fried fish can’t go wrong. It was salty and rubbery and perfect to chew on!

It was a basic gravy with nothing too remarkable about it. It didn’t have a huge flavour impact and we thought was a little bland.

There were many accompaniments for the Vegetarian to choose from. It varied from Rasam to Sambar, Dhal Pasayam, Potato Masala, Karakulambu to Curd, Raita and more! These, we believe, were another speciality at Ponnusamy given that they were much more flavourful and

The fruits were fresh and perfectly cut into cubes. It was simple yet a perfect and light dessert to finish the meal with.

In terms of ambience, the Colombo 05 outlet can do much better. There’s a pungent aroma in the restaurant that makes it a little difficult to dine at, and for a chain restaurant that has eateries in India and even Dubai, we expected a bit more quality-control.

So here you go, try the 50-dish Thali with your friends and family and let us know what you think!