Pulse
Everything else.. An Unexpected Story of Love: Dr. Sonali Deraniyagala ties the knot with...

Renowned alumni of the Universities of Oxford and Cambridge, economist and author of Wave Dr. Sonali Deraniyagala has tied the knot with, Fiona Shaw, the well-known British actress, known by most of us as Aunt Petunia of the popular Harry Potter films.

The economist and actress and tied the knot in 2018 and are now residing in bliss. The 60 year old actress remarked earlier this week saying, ‘I married and that calms you down. I didn’t really have a domestic life because I was always working. But I do have one now, which I love.’

This power couple surely has found happiness in each other’s company but it’s hard for us who have read Dr. Deraniyagala’s memoir ‘Wave’ to forget the detailed account of her experience losing her husband, parents, and two sons on what started out to be a family Christmas holiday to Dr. Deraniyagala’s motherland, our very own Sri Lanka. It was then the sea engulfed her husband Stephen Lissenburgh, their sons, five-year-old Vikram, and seven-year-old Nikhil, and her parents Gemini and Edward.

She recalls “Everyone vanishing in an instant, my spinning out from that mud, what is this, some kind of myth?”

For months after her world fell apart, she lived in isolation in Colombo, after which she moved to New York and was treated by the talented psychotherapist Mark Epstein, who inspired her to put her thoughts onto paper. The book won many awards and was praised for the manner in which it dealt with coping with loss.

In fact, it’s this very book which led her to happiness once again! Fiona Shaw was reportedly very moved by Sonali’s story and wished to meet the author. After an introduction through mutual friends, they hit it off and the rest is history!

After many trying years it’s heart-warming to see her with a bright smile on her face with her partner, Fiona. Both have now visited Sri Lanka multiple times as well!

When tragedy strikes, one never truly knows when they’d get even a glimpse of happiness. The 2004 Tsunami took away many lives, leaving the entire country shaken in grief. It is therefore truly inspiring, to see one such courageous individual, who somehow held on all these years, find true happiness once again; giving every single one of us a strong role model to look up to, a story of courage and healing to hold on to, and a love story that no one saw coming! 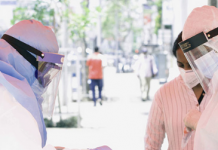